This used to be a very popular cake in my hometown back home during 70’s. My sister and I used to make this cake for almost every occasion.

At that time in Kosova bananas and kiwi fruit were not available all year around, and if there was a supply of these fruits you could not have them as often as they were quite pricy. The economy was run by the state government (Former Republic of Yugoslavia) and Kosova was the most neglected province by this government. The neglect was so severe to the point that amounted to discrimination. So, as one would expect, the likelihood of Kosovans being regularly supplied with exotic fruit was not in the government’s priority list. Therefore, whenever bananas hit the grocery stores there was a reason for us to make up an occasion and serve this cake.

Interestingly, few years before the war erupted in Former Yugoslavia, the government policy on economics changed a bit so there were plenty of private trade companies which emerged almost overnight, and guess what, bananas were everywhere, and the prices dropped so low so people were buying boxes of bananas to get over that craving they were missing for years. 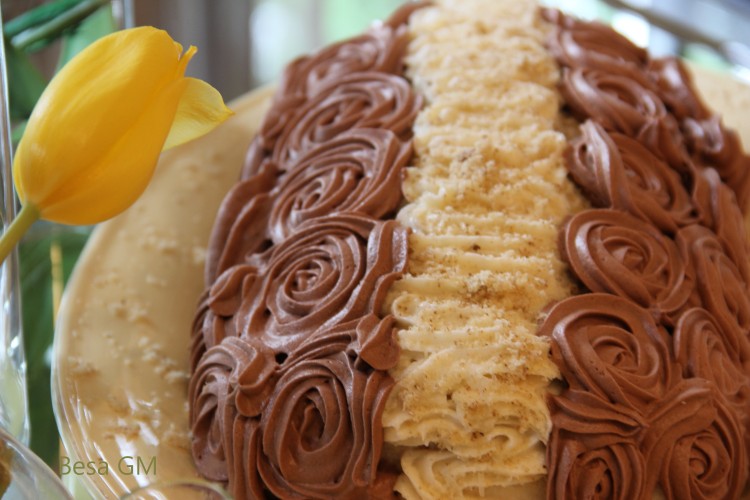 With the influx of bananas and other exotic fruit in the market, this cake ceased to be as popular as it used to, but my sister and I still used to make it occasionally. However, I have not made this cake for over 10 years and have almost forgotten this recipe. The other day I was searching through my old recipe book for a corn bread recipe and came across to “once famous Banana & Kiwi Fruit Cake” recipe, and struck by nostalgia I made this cake few days ago. So here is the recipe below.

To make the sponge:

In e separate bowl beat egg yolks and sugar on high speed and vanilla. Pour the egg yolk mixture over the flour and grated walnuts and mix with spatula.

Fold the egg white mixture into the batter very gently until just combined. Pour into prepared pan and spread to even out the surface.

Bake for 35 to 45 minutes or until a toothpick comes out clean. Turn sponge onto flat surface lined with a dish towel, remove the parchment paper and allow cooling.

Cut the sponge into two pieces with the following dimensions: 6 x 12 and 9×12 inches.

To make the filling:

Bring the milk to a boil. Remove the pot from the heat and add the mixture of corn starch and milk stirring vigorously to avoid clumping. Reduce the heat to a medium or low and continue to cook for about 5-10 minutes stirring continuously. Allow the mixture to completely cool at a room temperature, stirring it occasionally.

In e separate bowl whip the butter and powdered sugar until light and fluffy. Add and stir the corn starch mixture (cooled to a room temperature) into the butter, one spoon at a time, and continue whipping. Add vanilla.

Spread an inch thick layer of filling onto a small sponge rectangle. Place lengthwise a row of bananas. Spread another inch of filling over bananas. Place lengthwise a row of peeled kiwi fruits in the centre. Spread another one inch thick layer of filling over kiwi fruits. Cover the cake with the remaining piece of sponge cake, and decorate with the remaining filling and chocolate or white chocolate mousse.

If you happen to try this recipe I would love to hear from you.

Thank you for reading.